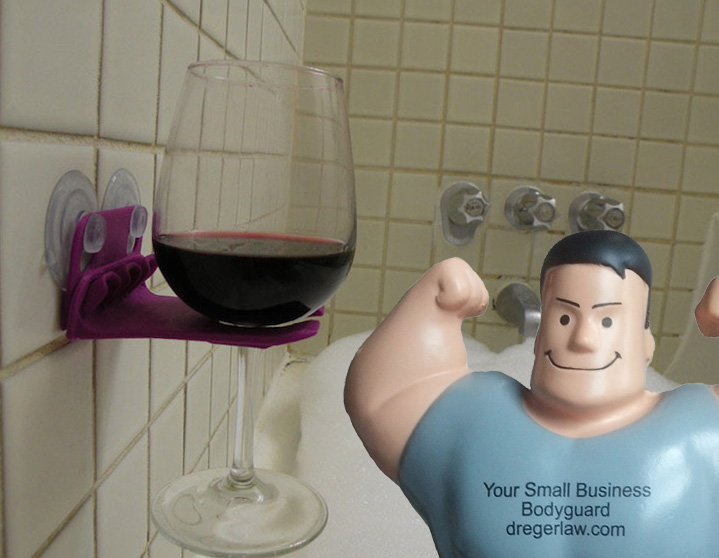 To illustrate the extreme importance of NDAs and restrictive covenants, a client of mine has consented for me to share in this post his company’s amazing growth experience, due in great part to his ability to confidently bring his product to market without risk that his success would be stolen from him.

Michael Aylesworth is the owner of ImagiGadget, Inc. and the inventor of a very marketable product called WaveHooks. The concept is simple. WaveHooks are small, portable shelves with suction cups that you can stick to the side of your tub or shower. So if you want to take a bath and relax with some wine, you have a sturdy area on which to put your glass.

Now originally, Mr. Aylesworth was able to make each WaveHook in his own home. But everything changed once he used social media to market his gadget. Then the popularity of Wavehooks exploded and his website video went viral. Almost overnight, he was hired to make hundreds of WaveHooks and fill massive orders within a very short period of time.

Major vendors, including Nordstrom and Amazon.com, were contacting him for bulk purchases and promotion, while national media programs like “The Today Show” and “Shark Tank” started inviting him to talk about his invention. Needless to say, he called me in a panic because he wasn’t equipped to keep up with the volume of business he’d generated.

At this point, he knew he had to find a manufacturing company to produce the WaveHooks for him. But how could he be sure the company he hired wouldn’t steal his idea? And how could he know the people he chose to market WaveHooks wouldn’t take advantage of his trade secrets?

This is where NDAs and restrictive covenants came into the picture and made a huge difference. I quickly helped him put these agreements in place so he wouldn’t have to worry about his concept getting stolen by those he trusted. As a result, ImagiGadget was able to successfully secure an international company to mass-produce Wavehooks and he was able to engage a Seattle-based marketing firm to successfully launch a national promotional campaign. Today, his company is continuing to enjoy its growth but with the confidence that its intellectual property is well-protected.

If you’re interested in learning more about WaveHooks, I highly recommend that you visit www.wavehooks.com . His idea is ingenious and he’s getting a lot of well-deserved attention for creating such a great product.

Next time, I will delve more deeply into the various kinds of NDAs and restrictive covenants. You’ll understand in even greater detail how they’re applied and why they’re so valuable to your small business.