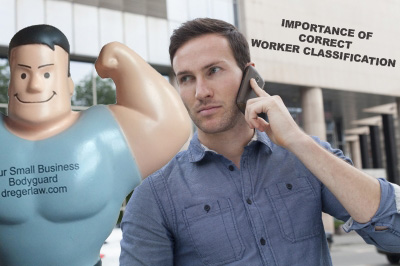 In my last post, I explained the critical importance of properly classifying your workers as either employees or independent contractors. Indeed, I warned you that if you do not classify your workers in accordance with state and federal guidelines, your staff incorrectly, your business could be subject to hefty penalties and retroactive interest.

Since it is so important to understand how the State of Illinois and the federal government evaluate the status of a worker, I’d like to discuss this subject in greater detail. That way, you’ll become more familiar with the evaluation factors, so you can better protect your business.

As I’ve previously mentioned, the Illinois courts rely on a ten factor “right to control” test. This tool enables the state to conclude whether or not your workers are employees or independent contractors. The difference between the two types of workers matters from a governmental perspective for purposes of employment benefits and taxation.

These ten factors cover a wide range of circumstances. Most importantly, Illinois wants to know how closely you manage your worker. For instance, does this individual receive training, materials and direction from you? If so, it is likely that the state will conclude that you “control” the worker and therefore, this worker is properly classified as a “controlled” employee rather than an “uncontrolled” independent contractor.

In general, the underlying theme to remember is how much control the business exerts over its staff members.

Similar to the state’s court system, the Illinois Unemployment Insurance Act examines the amount of power you have over your workers in order to determine the correct categorization. But instead of ten factors, there are only three. Furthermore, all three of these circumstances must be met for a worker to be recognized as an independent contractor. Otherwise, the worker is deemed to be an employee.

Below are the factors this statute systematically applies:

Again, control is the key. This means that the less supervision you have over a worker, the better the argument for classifying this individual as an independent contractor.

Like the state of Illinois, the Internal Revenue Service (IRS) also evaluates employment status based on the right to control. Therefore, if you direct, train and integrate workers’ services into your business operation, for example, it’s reasonable to expect the IRS to define your staff as employees rather than independent contractors. This means that you’ll be required to pay certain taxes and possible penalties, if you have misclassified your workers.While the amount of regulation over your workers is a critical element of the federal government’s final judgment, other components are also involved to generate this decision. In total, the IRS relies on twenty different factors.

These essential circumstances include:

Worker classification encompasses many detailed factors. So it’s understandable to feel overwhelmed by the numerous elements. But as a small business owner, you need to be aware that if you group your workers incorrectly, you could face harsh tax consequences. However, at DregerLaw, my team and I are well-versed in all of the factors the state and federal governments use to determine worker status. Let us make sure you’ve designated your staff correctly. For over 20 years, our experienced attorneys at DregerLaw have assisted hundreds of business owners throughout Chicago and Northern Illinois. We can help you, too.